A centennial celebration of the Negro Leagues launched at The National, thanks to the hard work of Seattle’s Jay Caldwell.

Glad to be joined by Caldwell, on this week’s “Tech of Sports.”

Caldwell is a collector who has a passion for preserving the history of the Negro Leagues.  At the National, he was offering a variety of commissioned artwork, bobbleheads and other items with profits designated for the Negro League Baseball Museum in Kansas City.  They’ll be used to advance educational and conservation missions to preserve the legacy of the Negro League players. Additional royalties will be paid to the players’ estates for securing the rights to use of their likenesses in the products.

There will be two large exhibits in 2020 commemorating the 100-year anniversary of the founding of the Negro Leagues.

“Our mission remains the same,” Caldwell stated. “To celebrate the Centennial of the founding of the Negro National League on February 13, 1920 at the Paseo YMCA in Kansas City. The Negro League Baseball Museum (www.nlbm.com) selected us to stage an art and memorabilia show at the NLBM between February 1 – May 31, 2020. The exhibit will feature 320 pieces of original art depicting African-American, Cuban and other players who participated in black baseball from 1867 – 1955 as well as over 80 pieces of Negro League memorabilia including the earliest pieces known relating to African-American baseball dating back to the 19th century.”

The exhibit will then move to Milwaukee and the National Bobblehead Hall of Fame and Museum, August 15, 2020 to February 15, 2021. 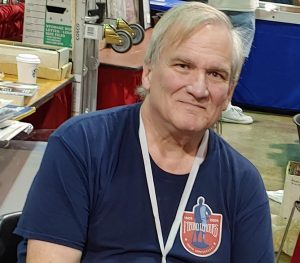 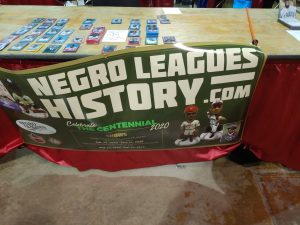 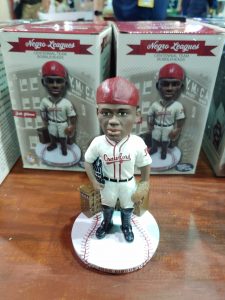 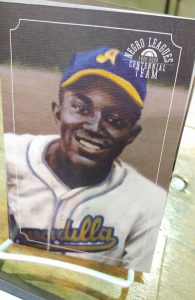 Born and raised in Arkansas, but now living in St. Louis, Steven Walden had one of the most colorful booths at this year’s National (#2169). Bright and bold works of art that look remarkable by themselves, but get even better when Walden himself hands you a pair of 3-D glasses. The 3-D sports art immediately jumps off the canvas.

“I’m an accidental artist and I didn’t know that I could paint until four years ago. This is my second National and is what I now do full-time. I work coast-to-coast with a lot of teams, athletes and charities.”

Walden may have mentioned “charities” last, but don’t let that fool you. His artwork has raised over $200,000 for charitable efforts over the last four years.

“Right now, it’s a one-man operation, so I handle everything: designing the site, marketing, promotion, customer service, ordering and keeping stock of inventory, mailing out orders, and social media interactions.”

Rick talked with the very talented, Steven Walden, at The National on August 3. Enjoy this interview. See more of Steven’s art here. 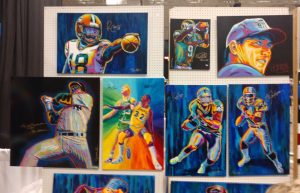 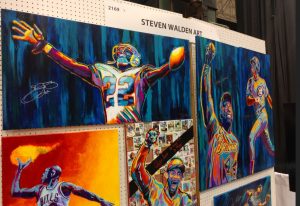 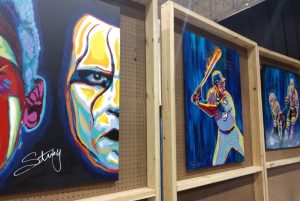 These next few “Tech of Sports” will be coming to you from last week’s National Sports Collectors Convention in Cleveland.

This week, Rick talks with Jeff Foy and three generations of sports collectors that make up the entire Foy Family and Card Country. They are from Indianapolis, IN and Jeff is a successful doctor, but he loves being a part of the baseball card and sports collecting universe. It’s a family affair for the Foy Family as they talk with Rick.

You couldn’t miss them at the National with their colorful Card Country shirts. What a great family and see how they benefit from not only being at this large show, but being a part of the hobby/industry.