Rick is joined by Kim Carducci this week and she has a new book!

Carducci’s debut book, The I of the Tiger, is out and it goes into depth about the mental health aspect of being a top performing athlete and offers ways athletes can manage their minds.

Carducci was able to rise above her darkest moments after retiring as a D1 swimmer at the University of North Carolina but many top sports competitors don’t. In The I of the Tiger, Carducci uncovers the many layers, fears, insecurities, and complexities the athlete identity produces. She offers insights on how this identity negatively impacts mental health and ways athletes can navigate pivotal transitions.

“When life hits us hardest, it’s important to understand the biological and psychological effects of pain to shed light on how we can best process our emotions.” offers Carducci. “With this understanding, we can move past the shock of a situation, grow stronger with a refreshed identity, and adopt a framework for life that encourages strength, clarity and light.”

Kim is a former DI swimmer, mental health advocate, podcaster and Founder of Everything Athletes.

In her athletic career, Kim struggled with depression and has since dedicated herself to helping other athletes cope with the realities of the sports world.
Kim founded Everything Athletes, an online refuge for competitors, where she offers the resources and tools needed to thrive in sport.

She resides in Atlanta, GA. 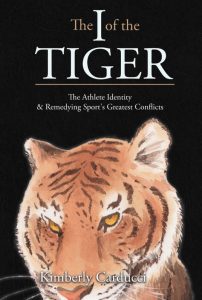 Rick is joined by Andrea Kremer this week.

Andrea Kremer and Hannah Storm became the first-ever female duo to call an NFL game in 2018, and are two of the most accomplished sports journalists in the business. They are back for their fourth year of calling Thursday Night Football on Prime Video, and speak to their legendary careers, their outlook for the season, as well as new ways for fans to explore and enjoy Thursday Night Football!

From the early season division rivalry game between the Seahawks and the Rams to the mid-winter battle between the Packers and the Browns, Thursday Night Football is THE hot ticket for football fans this season! Announcers Andrea Kremer and Hannah Storm will be back in the booth for the fourth straight season as they continue to make history as the first female duo to call NFL games. With decades of experience as storytellers, the Storm-Kremer feed brings a unique voice and viewpoint to every game!

Kremer talks about the new and exciting ways to live stream the game each Thursday on Prime Video, with features that let fans customize how they watch. Fans get ‘insider access’ to things like live stats and data previously only available to coaches and announcers, all without taking their eyes off the game.

Andrea Kremer (born February 25, 1959) is a multi-Emmy Award-winning American television sports journalist. She currently calls Thursday Night Football games for Amazon Prime Video making sports history, along with Hannah Storm, by becoming the first all-women booth to call any major men’s team sport, not just football.[1] Kremer is also Chief Correspondent for the NFL Network[2] and previously led the network’s coverage and in-depth reporting on health and safety. Her other current roles include correspondent for HBO’s Real Sports with Bryant Gumbel as well as co-host of We Need To Talk, the first ever all-female nationally televised weekly sports show on CBS. Until the 2011 season, she worked as a sideline reporter for NBC on the network’s coverage of Sunday Night Football.

Great to be joined by Andrea. 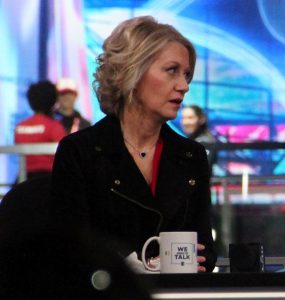 Great to have Rodney Hilton Brown on the podcast this week.

For most people, it’s a little known fact Cassius Clay Sr. was a house painter as well as fine arts painter in his hometown Louisville and that he shared his love of the arts and encouraged his son, known globally as Muhammad Ali, to explore his artistic side.

Over the years, Ali expressed himself beautifully and produced a large number of drawings, paintings and, poetry over the years. In 1977, historian, Rodney Hilton Brown, veteran, collector, and author, was the owner of an art gallery in Manhattan. He met Muhammad Ali at a charity boxing match in Boston. They formed a friendship and partnership that lasted for the rest of Ali’s lifetime. Rodney became the greatest boxer of all time’s art dealer, friend, confidant, representative to the United Nations, and business. Ali lovingly nicknamed him “The Vanilla Brother.”

Rodney, now in his seventh decade, felt the time was ripe to tell his story and share his never-before-revealed memories about the decades he spent with “the greatest of all time” with the world. The result is MUHAMMAD ALI: The Untold Story: Painter, Poet, and Prophet.

Hilton-Brown’s rare and extensive collection of Muhammad Ali’s artwork and some other items will be sold at auction this coming October 5, 2021, in the morning at Bonhams in Manhattan and online. 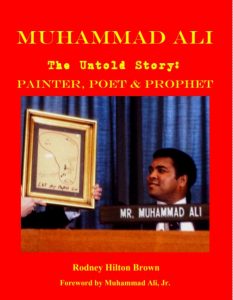 Grad joins me from Industry Summit in Las Vegas to talk about what’s hot in autographs and some of the current topics in authentication. That includes talking Michael Jordan autographs and how many fakes are out in the wild.

Since 2013, whenever someone brings in an autographed item of significance Rick Harrison of Pawn Stars will “call his guy”, which is Steve Grad.

“In the world of collecting, my opinion might mean something to friends, but to the rest of the world, it means nothing. You need Beckett Authentication. That’s what you have to have if you want to sell it”, said Rick.

Grad got his start collecting autographs over 25 years ago, acquiring more than 100,000 in-person autographs. He took his passion and knowledge of autographs and turned it into a successful business. Formerly working for a leading authentication company, Grad built their autograph authentication business during a 15-year tenure before moving to Beckett in 2016 to spearhead the launch of Beckett Authentication Services

A renowned expert in his field, Grad has authenticated many of the finest pieces in the sports collectible hobby including the Laws of Baseball, the highest-graded Babe Ruth single-signed baseball, the only known Joe Jackson signed photograph and numerous other high-end pieces of American sports history.

Since 2013, Grad has served as an autograph expert on History’s “Pawn Stars”, appearing on over 135 episodes to date.

Great to be joined by my friend, Steve Grad! 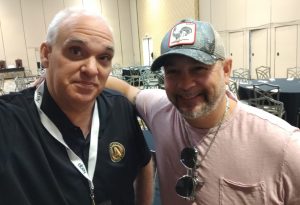 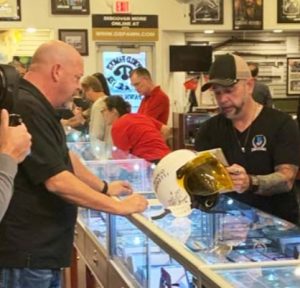 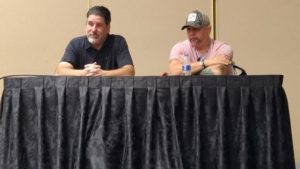 Talking everything travel, Las Vegas and wagering this week with Mark Frissora, former CEO and President of Caesars Entertainment.

Mark P. Frissora was previously the Chief Executive Officer and President of Caesars Entertainment. He also has served as the chair and CEO of two Fortune 500 companies, Hertz Global Holdings, and Tenneco, Inc. With over 42 years of business experience, Mr. Frissora’s expertise spans across all levels of managerial and functional roles. He is known especially for consistently generating stakeholder/shareholder value at highly leveraged companies in both private equity and public markets, and successfully leading companies out of bankruptcy. Mr. Frissora credits his success to a strong work culture that focuses on customer-centricity, diversity, and employee engagement.

Great talking with Mark as he has his finger on the pulse of so many things. 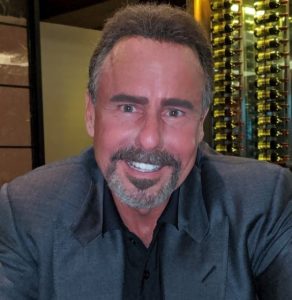 Rick is joined by Olympian, Scott Shipley this week to talk about a new exciting whitewater facility in Montgomery, Alabama.

The center, currently under construction in Montgomery, AL, is the future training ground of Olympians.

Easily accessible from 1-85 and 1-65 exits, the Montgomery Whitewater Center is a world-class outdoor activities center within walking distance of the city’s burgeoning downtown. The development, which broke ground in June 2021 and is scheduled to be completed in 2023, will be anchored by an Olympic-standard recirculating whitewater course, which will allow users of all ages and skillsets to participate at difficulty levels ranging from beginner to expert. The Montgomery Whitewater Center will also include a variety of dry-side outdoor activities such as climbing areas, ziplines, ropes courses and trails for hiking and biking with the idea that visitors can have a great day with or without ever getting in the water.

Construction of the Montgomery Whitewater Project is expected to employ 640 people and have an economic impact of $39.8 million.

Shipley brings a varied background to the table. Scott Shipley is among the best-known American kayakers in the world today. A veteran of three Olympic games (’92, ’96, ’00) and holder of four world titles, Shipley has more than 25 years experience as a whitewater competitor. Scott also holds a bachelor’s and master’s degree in Mechanical Engineering from top-ranked Georgia Institute of Technology.

Shipley’s combined expertise in both Whitewater and Engineering Design has made him the go-to designer for some of the world’s most demanding whitewater design projects. Shipley has been credited with driving innovation in the whitewater park industry by pushing the design envelope. Shipley’s innovations include a patented Whitewater Terrain Park system that redefines whitewater recreation and a patented moveable obstacle system that is the world’s first three-dimensional modular obstacle allowing for complete reconfiguration of an existing whitewater park. 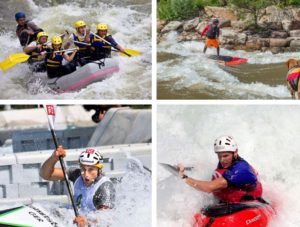