NoSweat, a Minneapolis-based company that creates patented sweat-absorbing headwear liners, and it’s President, Jared Robins are onto something. Robins, who previously held the position of Chief Operating Officer at NoSweat joins Rick on “Tech of Sports” this week.

NoSweat is a lifestyle brand and manufacturer of products that are 100% USA made and built to increase performance, safety and hygiene for anyone who sweats and wears some type of hat, helmet, visor or hard-hat. NoSweat’s goal is to provide innovative products that improve how people work, play and live. Founded in 2008 by Justin Johnson and based out of Minneapolis, NoSweat offers a growing, patented line of sweat-absorbing solutions that are unique to the sports, construction, industrial, food prep, military, and municipal spaces.

Robins built his career forming investment and endorsement partnerships between startups and athletes. He has helped sign some of the biggest names in sports to endorse and invest in NoSweat including: Washington Capitals winger T.J. Oshie, Detroit Lions receiver Golden Tate, Houston Astros pitcher Dallas Keuchel, and PGA player Stewart Cink. In addition, Robins recently played an integral part in negotiating a deal to make NoSweat an Official Licensed product of the PGA Tour.

“Over the past 18 months it has been a pleasure working with our executive team of Justin Johnson, Jon Marshalla, and Collin lacarella. Together we have grown NoSweat from a Minnesota hockey startup, to a company that now has multiple products which are both nationally and internationally recognized,” said Jared Robins. “I am extremely honored and excited to represent NoSweat into the next stages of growth, and am looking forward to working in this capacity immediately as we begin our next capital fundraise.”

Robins has a history of being involved with sports and has previously interned for National Football Association Players Association Chief, Gene Upshaw. He later went on to graduate from the University of Arizona with a degree in business management. Robins built his network of athlete connections while attending Bullis School in Potomac, MD, and has previously worked for the smart headphone company Muzik.

NoSweat has created the first disposable performance liners for hats, helmets, hard hats and visors that absorb sweat instantly while preventing odors, stains and even acne.

NoSweat thin liners simply peel and stick to the inside of headwear and feature SweatLockÔ technology engineered to instantly absorb sweat. Moisture is locked inside the line to help prevent dripping sweat, fogging, sweat stains, acne and odor. Each NoSweat liner absorbs around 2 ounces of sweat.

The liners are performance, safety and hygiene based allowing users to perform at their best, without distractions that are associated with sweating. Depending on the person and activities being performed, each liner can last anywhere from one round of golf to two weeks of standard hat usage. The liners also preserve hats and keep the inside looking as fresh as the day it was bought.

Enjoy Jared talking about his journey and success with NoSweat, one of Rick’s favorite products and it’s under $5. 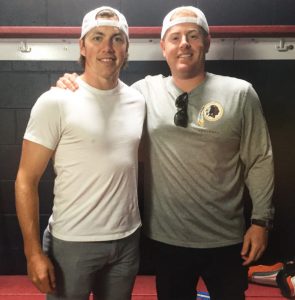 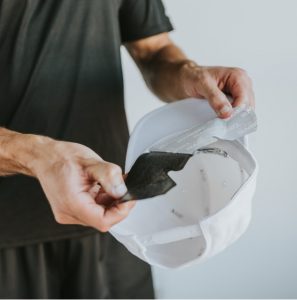