Rick is joined by the fantastic duo from Pocket Radar, Christ Stewart and Steve Goody.

Chris Stewart is Pocket Radar’s President and COO. He has an extensive engineering and inventor background holding five patents. He is a volunteer professor at Sonoma State University where he lectures in electrical engineering and business entrepreneurship.

Steve Goody is Pocket Radar’s CEO. He has an inventor and architectural background and is the inventor/ co-inventor on seventeen patents. He holds a BSEE from the University of California, Davis.

Based in Santa Rosa, California, Pocket Radar was founded on the principle that radar-gun technology should be affordable and user-friendly. Their goal was to create an accurate product line that can be use by anyone from professionals to everyday consumers. Pocket Radar’s product line is trusted by teams like the San Diego Padres, the Colorado Rockies, the Milwaukee Brewers, Georgia Tech Baseball Team, the University of Missouri Baseball Team, and many more.

Prior to being a co-founder and President/COO of Pocket Radar Inc. Chris was the Business Manager of the Agilent Technologies Radio Test business. He had P&L responsibility for the entire operation, with direct responsibility for global product development teams, marketing teams and manufacturing teams. Previously, Chris served in a series of Agilent R&D leadership positions moving from project manager to section manager to lab manager. Before the formation of Agilent, he was an R&D project manager for Hewlett Packard in their Test and Measurement business. During this time, Chris held multiple intrepreneurial positions where he successfully helped start up several new businesses and integrate multiple company acquisitions.

Chris has extensive experience building strong development teams and leading new product introductions. Before moving into management, he spent 10 years as a Microwave, RF, and Analog design engineer at Hewlett Packard gaining experience in R&D, Marketing, and Manufacturing. As an engineer, Chris designed products for the test system that is used to calibrate every Radar system in the US Navy. He has also done substantial consulting in the areas of design, new product development, and strategic business planning. He has published multiple papers and technical articles and holds 5 granted patents with more pending. Chris is also a volunteer professor at Sonoma State University where he lectures in Electrical Engineering and Business Entrepreneurship. He also serves as chairman of the External Advisory Board for the SSU Makerspace and Lead Industry Advisor for the Electrical Engineering Department.

A true inventor at heart, Chris built his first radio transmitter when he was 8 years old and has been inventing ever since. At age 16 he invented a novel radio-controlled switching system that won first place in a state-wide electronics competition. This led directly to his first job as a radio engineer at WATH/WXTQ Radio. He earned his First Class Commercial FCC License and was promoted to Chief Engineer at age 18. He put himself through college working as an engineer at WNCI Radio where he developed new audio processing and synchronous timing systems.

Before being a co-founder and CEO of Pocket Radar Inc. Steve was a co-founder and HW system architect at Caymas Systems where he helped create an award winning line of identity driven NAC Appliances. Prior to that, he was a key member of the early start-up engineering team at Cerent Corp. (acquired by Cisco Systems). He was senior HW designer and architect of Ethernet products for the industry leading Cisco ONS15454.

Before Cerent, Steve worked for Next Level Communications where he was a HW designer and architect on various telecommunications and networking products. Steve has many years of experience in HW design and architecture with extensive experience in Ethernet switching, SONET, timing, ASICs, FPGAs, Embedded FW, and DSP. Steve spent over 12 years of his professional career at Hewlett Packard as a hardware designer and principal engineer/scientist, responsible for a variety of networking product designs and architectures, including hubs, switches and network adapters.

Steve is named an inventor/co-inventor on 17 patents and holds a BSEE from the University of California, Davis. He has been a passionate inventor from a very early age and still loves the challenge of taking abstract ideas and turning them into reality.

The Smart Coach Radar™ is the first affordable, complete speed and video training system that empowers the modern athlete and coach in many sports with the ability to create and share a digital record of their progress. By providing actionable insights into important metrics like hitting exit velocity, serve speed and pitch speed, coaches and athletes can now optimize their techniques and methods to get better results in the new era of athletic training.

A great discussion this week on Pocket Radar, sports technology and more! 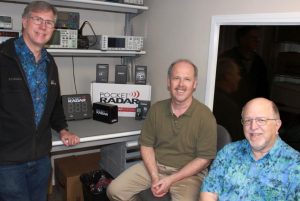 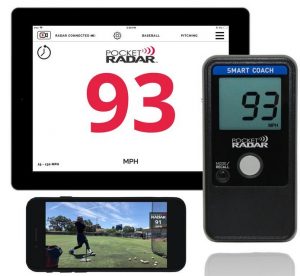