Junior Achievement students from across North America pitched original business concepts for the chance to generate a $75,000 donation from FedEx at the 2018 TOUR Championship.

One of the competitors, from Jacksonville, FL, was high school student, Rosa Santos. Santos and her team’s goal is to provide fresh fruit cups to the students at her high school as a replacement for unhealthy snacks. Santos and her Tropical Wave team won her regional and presented in Atlanta.

Tropical Wave provides an affordable healthier snack alternative during and after school. Wolfpack’s Tropical Wave’s goal is to encourage students to choose a better snack to nourish a healthy mind and body.

Although they didn’t win first prize, their presentation was impressive and it was good to hear that athletes at her school are some of their best customers.

At the event, Junior Achievement (JA) students from across North America presented original business ideas to a panel of judges for the chance to generate a $75,000 donation from FedEx to their local JA chapter. The panel judge will be headlined by 3x Pro Bowler and Atlanta Falcons Ring of Honor member Warrick Dunn and 3x PGA TOUR tournament winner Marc Leishman.

Since 1996, FedEx has donated more than $14 million to JA Worldwide in support of the small businesses and entrepreneurs of tomorrow.
Launched in 2017, the FedEx Junior Business Challenge is currently in its second season. It is part of the FedEx Cares global giving initiative, in which FedEx is investing $200 million in over 200 global communities around the world by 2020. 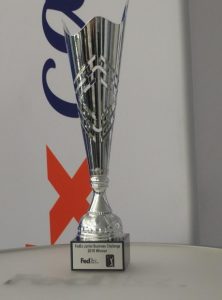 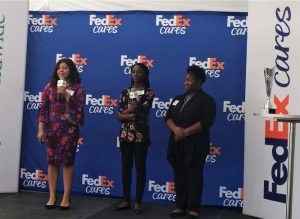