Sportco is looking to change the way fans experience their favorite sports.

How is the Spanish tennis player going to change the lives of all sports fans?

A surprising move, linking sport and technology, is designed to change people’s news consumption and upgrade the status of sports fans in the media

The former ATP tennis player, Báguena, will act as a Sports Advisor in a new venture. Báguena, reached the semi-finals in Hypo Group Tennis International at Bari, Italy, in 1988. He made the second round of the men’s doubles in the 1989 French Open (Roland Garros) in Paris. His career highlight happened in 1990 when Báguena teamed up with Omar Camporese (Ranked 18 in his prime) to win the Madrid Grand Prix Trophy. The Spaniard made his best performance of the year in Florence, where he and Carlos Costa, one of the leading clay court players in the early 1990s, were doubles runners-up.

Báguena chose to partner with Sportco – a site which gathers sports fans discourse, using an innovative technology which will reward readers for any involvement on the site. The fascinating tech project seeks to unite all sports fans under one umbrella brand and change the way sports fans will play a role in the future of sports media.

Sportco recently announced to its 500k readers, in a statement published on their websites, that an algorithm will measure their readers’ involvement and reward them with sports tickets and merchandises for any action they perform on the site, whether it’s content writing, sharing, etc. Sportco currently possesses sports fans community platforms (websites, apps, social media channels) such as Cricwizz, Sportswizz, SportsQwizz, Sportswizzleague and more.

Báguena expressed his support in an announcement on the Sportco’s website: “Sports is an industry that is motivated by passion, by both players and fans, and Sportco’s platform takes it to the next step. The project was aided by brilliant technology that reached maturity, and I was very sympathized with the idea that in essence put the sports fans in the center. I see the project as great potential and real news in the field of communications and sports”.

Báguena remained close to sports after retiring and currently coaches the future generation of Tennis at the Barcelona Tennis Training Center. 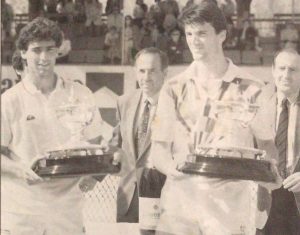