A great talk with this interesting author this week.

Tiny Blunders, Big Disasters: Thirty-Nine Tiny Mistakes That Changed the World Forever!, by Jared Knott, is a multiple award winning bestselling book. Knott just picked up the 2021 International Book Award, in the History category, and a New Generation Indie Award, (Finalist History Non-Fiction). Having garnered over 720 positive reviews, including one from the Mensa Bulletin, Tiny Blunders, Big Disasters hit the Amazon bestseller right out of the gate and has remained there for seven-months, this while also #1 in six different categories. In addition, a major audiobook producer, Black Stone, is putting the finishing touches on a Tiny Blunders audiobook.

These Tiny Blunders which caused Big Disasters also revolve around the personality and upbringing of the famous and infamous, thus allowing Jared Knott to explore various dynamics such as the intense family rivalry in the Kennedy Clan or the circumstances which gave rise to Presidents Lyndon Baines Johnson and Richard M. Nixon. From ancient to modern times, battles, war campaigns, bureaucratic decision making and the psychological makeup of the main players is explored.

Knott wants the reader to learn from history, to know that looking after the small details is vital in order to obtain the desired outcome. Carelessness changes and costs lives, many times sparking a tsunami which engulfs individuals, nations and empires. You will never discount the small details again after reading Tiny Blunders, Big Disasters. Of course, Tiny Blunders can lead to wonderful discoveries, such as when Alexander Fleming left some bread out and it molded, thus leading to the discovery of penicillin. 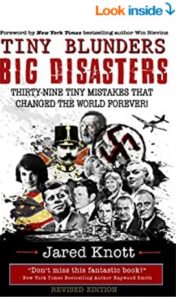