Chris Clarey joins Rick this week to talk a little tennis and his new book on Roger Federer.

There have been other biographies of Roger Federer, but never one with this kind of access to the man himself, his support team, and the most prominent figures in the game, including such rivals as Rafael Nadal, Novak Djokovic, and Andy Roddick. In THE MASTER: The Brilliant Career of Roger Federer (Twelve, August 24, 2021), New York Times correspondent Christopher Clarey sits down with Federer and those closest to him to tell the story of the greatest player in men’s tennis.

THE MASTER tells the story of Federer’s life and career on both an intimate and grand scale, in a way no one else could possibly do. Fantastic timing as Federer is in the news that he will not play again in 2021.

Great to talk to Chris leading up to the US Open and a great read! 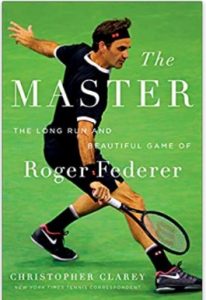