It was great to have the opportunity to spend some time with the legendary Olympic sprinter, Usain Bolt.

Bolt joins Rick on “Tech of Sports” discussing his passion for music and favorite products at the Gibson tent at CES 2018.

He was insightful, representing Philips Bass +  new Headphones at the show. In addition to his countless accolades on the track, the last six or so years has introduced the world to not just Usain Bolt the Olympic medalist, but also a regular guy who’s passionate about music and likes to DJ around his races.

An eight-time Olympic gold medalist, Bolt won the 100 m, 200 m and 4 × 100 m relay at three consecutive Olympic Games, although he subsequently forfeited one of the gold medals (as well as the world record set therein) nine years after the fact due to a teammate’s disqualification for doping offences. He gained worldwide popularity for his double sprint victory at the 2008 Beijing Olympics in world record times. Bolt is the only sprinter to win Olympic 100 m and 200 m titles at three consecutive Olympics (2008, 2012 and 2016); this is a feat referred to as the “triple double” that will be very difficult for anyone to duplicate.

He now turns his attention to music and talks with Rick! 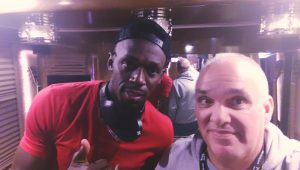 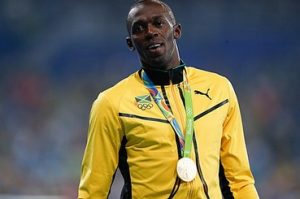