This week, an excerpt from Gary Vee’s talk at the National Sports Collectors Convention in Chicago.

Gary Vaynerchuk is no stranger to technology as he has invested in numerous tech startups. Well, he’s also an investor in baseball and sports cards.

Serial entrepreneur, social influencer and CEO of VaynerMedia, Gary Vaynerchuk, never had the chance to attend “The National” when he was a young card collector and “investor.”

So to say he was “giddy” at a Wednesday afternoon panel discussion to open the 40th edition of the “Super Bowl of Sports Collectibles’ was an understatement. The pre VIP Party special appearance also featured Josh Luber, co-founder of StockX, an online marketplace that is creditied with beginning the wheeling and dealing of collectible sneakers in our culture.

“I’m incredibly humbled to be here,” admitted Vaynerchuk in his opening remarks. “I’m an immigrant from the (former) Soviet Union and grew up in New Jersey among the lemonade stands and having sports cards.”

Vaynerchuk, worth an estimated $50 billion was an early investor in many tech companies, including Twitter, Tumblr, Uber and Snap.

In this clip, Vaynerchuk explains why sports cards and sports collectibles are so hot again. Also what does the future hold for sports collecting? Very interesting opinions and theories. 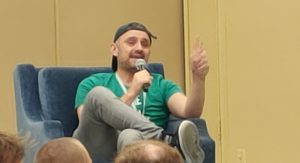 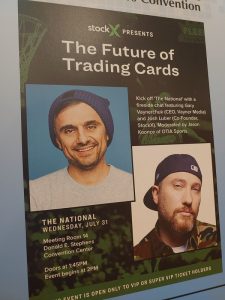