Hired on March 24, 2013 and tasked with building a football program from scratch, Bohannon embraced the challenge and quickly turned Kennesaw State into the best five-year start-up program in college football history in 2019 with a 48-15 overall record, two Big South Conference championships, three straight appearances in the FCS Playoffs and four playoff victories.

He is tied for first in Big South Conference history with 63 victories and he became the fastest coach to win 45 games when he reached the benchmark with a 38-35 win over Campbell on Nov. 9, 2019. In the first five years of the program, 100 national polls have been released with the Owls appearing in over 67-percent of the rankings. Of those 100 polls, Kennesaw State has been inside the top-10 41-percent of the time.

The 2019 season was the beginning of a new era in Kennesaw State football, as the original signing class moved on and gave way to a new crop of talented players hungry to continue the championship tradition. Not only did the team deliver, but they recorded the program’s third-straight 11-win season and made a return trip to the FCS Playoffs where they knocked off No. 11 Wofford on the road in the opening round.

After putting the world on notice in 2017 with a 12-2 season, the Owls somehow outdid themselves during the 2018 campaign. Ranked No. 2 in the nation for much of the year, KSU earned the No. 4 overall seed in the playoffs and took an 11-game winning streak to a second consecutive quarterfinal appearance where the Owls held the third-longest home streak in the nation that dated back over two calendar years.

Bohannon, 50, put Kennesaw State on the map in 2017 when he led the Owls to a 12-2 season and an outright Big South Championship after finishing conference play undefeated at 5-0. Holding the country’s top rushing offense, the Owls would make their first postseason berth in stellar fashion, getting revenge from their season-opening loss to Samford by winning 28-17 to advance.

The Owls then upset No. 3 Jacksonville State in the second round by scoring 14 unanswered second-half points to win 17-7. KSU’s historic run would falter in the quarterfinals in a tough 34-27 loss to No. 5 Sam Houston State, but not before solidifying a young Kennesaw State team as one of the nation’s top programs.

Under Bohannon’s tutelage emerged one of the country’s premiere quarterbacks in Chandler Burks who was named the 2018 College Football Performance Awards FCS National Performer of the Year. He also finished runner-up for the Walter Payton Award, given to the nation’s top FCS offensive player. He ended his career with a 31-6 record as the starting quarterback, a league record 56 rushing touchdowns and 3,431 yards on the ground.

The national awards shifted to the defensive side of the ball in 2017, as Bryson Armstrong brought home the prestigious Jerry Rice Award as the FCS National Freshman of the Year. On his way to first-team All-America honors, Armstrong finished the 2017 campaign with 114 total tackles (85 solo), 12.5 tackles for loss, 11.0 sacks, three interceptions, seven pass breakups, one quarterback hurry, four recovered fumbles, three forced fumbles and one blocked kick.

It took Bohannon just two seasons to vie for a Big South Conference title and reach the Top 25 as the Owls finished their debut year 6-5 before posting an 8-3 mark in 2016.

His first two teams at Kennesaw State won 14 times in 22 games while posting eye-popping offensive numbers. The Owls rushed for 293 yards per game in 2015, which led the Big South and ranked sixth nationally. His offense then surpassed that number in 2016, rolling up 320.6 yards per game on the ground to finish third in the FCS. The last three seasons saw KSU record the three best rushing seasons in Big South history behind VMI’s record-breaking 357.5 yards in 2008.

Bohannon’s Owls began their debut season 4-1 in non-conference action and made history again with a 12-7 win over Gardner-Webb on October 17 as Kennesaw State became the first Big South member to win its first conference game in its initial year as a member.

Another Big South win over Monmouth allowed the Owls to clinch a winning record. The team finished 6-5 to tie Georgia State for the third-best record by an FCS program in its inaugural season. 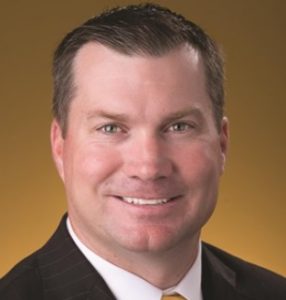 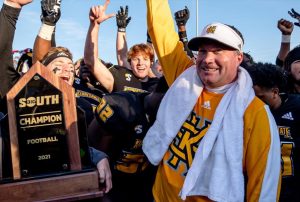