Rick is joined by PGA Tour winner and all around nice guy, Chip Beck at the 2020 PGA Show, where he was appearing again for Pitchfix.

Chip Beck is a three-time All-American at the University of Georgia. He has four victories on the PGA Tour and twenty runner-up finishes. He spent 40 weeks in the top 10 of the Official World Golf Rankings between 1988 and 1989.

He was born in Fayetteville, North Carolina. He was the runner-up at the 1993 Masters Tournament, and was tied for runner-up at the 1986 and 1989 U.S. Open championships. He is also noted for his stellar play at the 1991 Ryder Cup held at the Kiawah Island Golf Resort and is a three-time Ryder Cup participant, also playing in 1989 and 1993 at The Belfry Golf & Country Club in Sutton Coldfield, England. He won the Vardon Trophy in 1988.

Beck shot a round of 59 in the third round of the 1991 Las Vegas Invitational on the Sunrise Golf Club (par 72) in Las Vegas, Nevada, one of only six players in the history of the PGA Tour ever to do so. His round included 5 pars and 13 birdies (a PGA Tour record for birdies in one round) including a three footer on the 18th hole. Beck finished tied for third in the tournament. He also shot a hole-in-one (also a double eagle) at the par-4 9th hole in the first round of the 2003 Omaha Classic, a Nationwide Tour event. It was the first in Nationwide Tour history and second recorded in the history of the PGA Tour umbrella combined. Chip also has played on the PGA Tour Champions.

Pitchfix’s new products will broaden the company’s product portfolio beyond divot tools. In addition to the Greenkeeper Pro divot repair tool, the PickCup, AquaBrush and AimPRO are going to be offered in 2020.

The 33” Greenkeeper Pro is constructed of a rubberized handle, carbon fiber shaft and a spring loaded steel cast head with stainless steel ‘teardrop’ pins. With one push down on the handle into the ball mark, the stainless steel prongs in the head pull up, creating a level surface and a perfectly fixed ball mark without bending down.

The Greenkeeper Pro comes in a two-pack with each tool designed for varying degrees of green hardness.

PickCup is a device designed to improve the efficiency of removing golf balls from the cup while maintaining the integrity of the grass surrounding the hole.

The creation of PickCup is in large part a result of the new R&A and USGA rule that now allows flagsticks to remain in the hole while putting a ball from on the green. Many golfers, when removing the ball from the cup, will insert their hand or putter between the flag stick and the edge of the hole, creating damage to the hole edges. This causes the greenkeeper to move the hole around the green, creating extra repair and maintenance work.

The PickCup solution, easy to install and replace, has a soft edge to protect the grass around the hole and easily fits on any flagstick. PickCup helps improve speed of play, eliminates damage to the edge of the hole, reduces the need for new pin placements and eliminates the requirement to bend over to the retrieve balls.

AquaBrush is a new essential device for golf bags, fitted with interchangeable and replaceable brush-heads and a water reservoir used to clean club heads. Press the button on top of AquaBrush and a spray of water shoots out and on to the club face. Wipe it clean with a towel or the brush attached at the base of the grip.

Aquabrush is available in multiple colors and as with Pitchfix’ range of award winning divot tools, can be logo’s with a club crest, tournament brand or logo.

AimPRO is a compacts, circular ball marker with a mirror on top designed as a practice aid to help golfers learn and master the Aimpoint method of reading the break of a putt. The mirrored surface is placed upon the putting green and helps the golfer learn how to calculate the correct scale of any slope on the green and adjust their aim accordingly. The system promises to help users find the right line and improve the accuracy of their putting. AimPRO is designed to help golfers of any ability learn this relatively new method of reading the break that is proving increasingly popular with Tour Pros.

Founded in 2005, Pitchfix is the market leader for switchblade divot tools and other golf green related products in Europe and Asia and is renowned for its high standards in design and product quality. It aims to be the market leader in divot tools and other golf related products in the United States by designing, manufacturing and distributing an ever-growing line of high quality and innovative European designed products through selected distribution partners.

The Pitchfix Fusion 2.5 was named “Best Divot Repair Tool” by Golf Digest in its 2019 Editors’ Choice Awards for the third consecutive year. 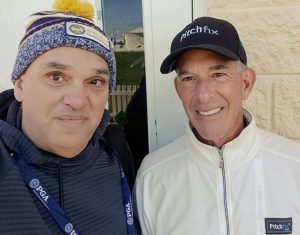 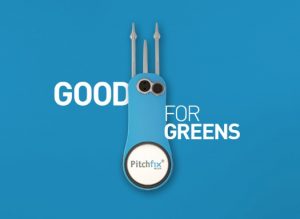 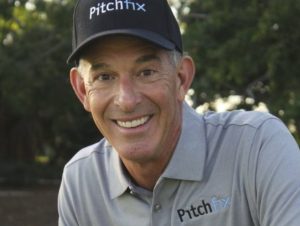 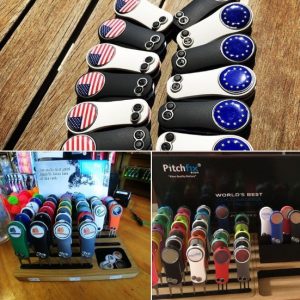 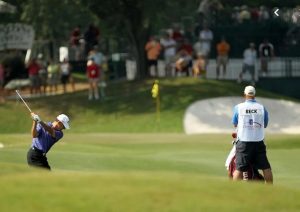