Great to be joined by quite an interesting character, horse trainer, John Parisella, talking about his new book. And does he have some stories to tell.

The book is: From the Streets of Brooklyn to Trainer to the Stars: John Parisella’s Lifetime of Celebrity Connections

This is an amazing read!

An accomplished trainer of Thoroughbred racehorses, John Parisella grew up on the streets of post-Depression, post-war Brooklyn. The son of a bookmaker and shylock, he began playing the horses at Aqueduct and Belmont while in high school. He became the protégé of fellow New Yorker and Hall of Fame trainer, John Campo. Parisella ran horses at thirty-eight tracks and half the Thoroughbreds he sent to the post finished in the money. His most famous horse, Simply Majestic, once ran faster than the great Secretariat. That’s only part of the story of the man who went FROM THE STREETS OF BROOKLYN TO TRAINER TO THE STARS.

John Parisella enjoyed over five decades of adventures with the biggest names in sports and entertainment. In the early 1970s he appeared twice on “The Tonight Show with Johnny Carson,” and on his second appearance was proclaimed the “Trainer to the Stars” by actor Jack Klugman because, at that time, Parisella was training horses for a stable of movie stars that included Klugman, Caan and Telly Savalas. He went drinking with Mantle; cajoled Steinbrenner into helping Joe Pepitone and lived with James Caan at the height of Caan’s fame; became Pitino’s close friend and was the intermediary with the New York Knicks as he orchestrated Pitino’s move to become head basketball coach at the University of Kentucky; and, as Bethenny Frankel’s stepfather, was the father-figure in the future Reality TV star’s life as she was growing up.

The long list of notable figures with whom the TRAINER TO THE STARS was connected includes “Broadway Joe” Namath . . . Presidential candidate Barry Goldwater . . . iconic actor James Stewart . . . lead singer Bono of the mega-group U2 . . . former Kentucky Gov. Brereton Jones . . . and New York City shock jock Howard Stern . . . as they, too, are among the many stars within John Parisella’s almost-unimaginable orbit. He was even befriended by John A. Gotti, son of the man called The Teflon Don, mob boss John J. Gotti.

John Parisella lived faster than his horses ran, burning through millions of dollars as a result of his generosity and profligate spending. Diagnosed with bipolar disorder, he endured addictive behaviors associated with the condition—drug abuse and compulsive gambling. From the Streets of Brooklyn to Trainer to the Stars shares the whole story with never told behind-the-scenes conversations and dealings that helped make history.

Have a listen to Rick ad John this week- a lot of fun! 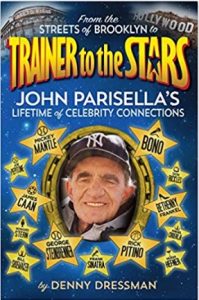 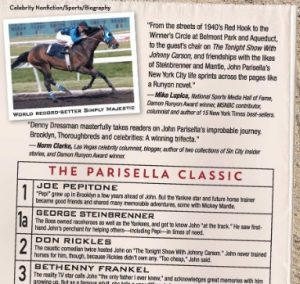